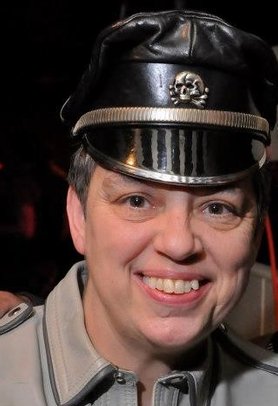 Jo Arnone is considered one of the four founding mothers of the women’s sex positive and S/M movement, co-founding the Lesbian Sex Mafia in 1981 as a sex positive feminist’s response to the anti-pornography movement. She was instrumental in organizing the 1982 Speak Out on Politically Incorrect Sex which corresponded to the infamous Barnard Conference held in New York City in April of that year.

Jo marched in her first New York City Gay Pride March in 1975 and, in 1979, became the first woman to march the Lavender Line in full leather. She began announcing the March for Heritage of Pride in 1985, and did so for nearly 40 years.

For over 35 years, Jo has been a community fundraiser, raising money for a diverse array of organizations including Brother Help Thyself, the National Gay and Lesbian Task Force, the National Gay and Lesbian Antiviolence Project, the National Coalition on Sexual Freedom, the International Antiviolence Project, Heritage of Pride, Capital Pride, The Whitman Walker Clinic, The Leather Archive, and the Rainbow Railroad of Canada.  Additionally, she has raised funds for scores of local AIDS, animal, youth, and elder organizations around the country for whom a few thousand dollars can make the difference between success and failure. In 2012, the Leather Heart Foundation presented her with the Million Dollar Heart Award in recognition of having raised well over $1,000,000 for worthy charities.

Jo has been the keynote speaker at IVY Q held at Yale in 2013 and the endnote speaker for the LLC in 2014.

Her awards are many: among them are Heritage of Pride’s David Norrie Award for behind the scenes volunteerism, The Hero of Leather Pride Award, The American Brotherhood Award for Community Service, DC Eagle Community Appreciation Award, The Legend of Leather Award, Lifetime Achievement Awards from both Pantheon of Leather and the NLA, and The Mister Marcus Hernandez Lifetime Achievement Award.  In 1984 she became the first woman given Honorary Membership in GMSMA and, in 2004, she was elected to the DC Animal Council with the title of Snowy Owl.