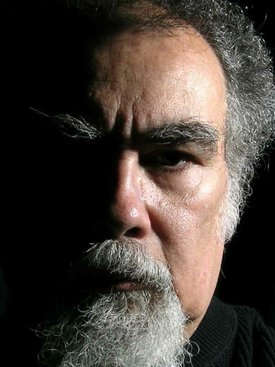 Efrain John Gonzalez is a fine arts photographer born in New York City, with an artistic bent to the erotic, the unusual, the underground, the genderqueer and the sexually nonconforming. An internationally published photographer who for the past 40 years has been seeking radical images that tells a story of people finding their souls with piercing, branding, cuttings, tattoos, latex, leather and a whole lot of radical sex and queer sexuality. He captures images in the dark of people living out their dreams and fantasies, wandering through their private universe. He has traveled from coast to coast to find images of people exploring, testing, and streching their limits, as well as their skin. A large portion of his photographic imagery was taken live at the moment it happened, at events such as

He has gone to the dark caverns of the meat market, and the sunny fields of the heartland, I go into locked rooms to see people play and love in ways so strange and bizzare to polite society. I have been a witness to men and women transforming their bodies, and their souls in order to reach into their hearts.