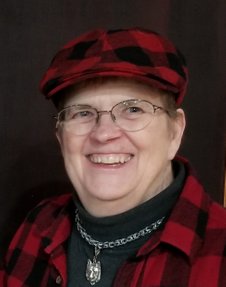 Before finding leather, Jody was an officer in the US Air Force Space Division, hence her moniker as "Mama's Space Cadet." In 1980, having left the military, Jody came out as a leatherdyke and slave in Los Angeles. Shortly thereafter, she founded Leather and Lace, the first women’s leather club sporting uniforms. She was active in the Los Angeles leather community until 1995, taking a hiatus for law school. In 2000, Jody moved to San Francisco, joined the Exiles, and, two years later, became Liza’s slave. Now living in Portland Oregon, she is a member of Portland Bad Girls, San Francisco Exiles and MAsT Portland.

Jody has taught extensively, judged numerous and varied contests, organized a range of events, keynoted, competed (serving as International slave 2011 (and 2021), and served on the staff of IMsL, WILL, and Leather Reign. With her Mistress, she produces the Master slave Retreat and is an emeritus producer of the Ms. San Francisco Leather contest. She also co-produces a small s-type retreat in the Pacific Northwest. She was honored with MAST International’s 2012 Presenter of the Year Award (co-held with her Mistress) and as the San Francisco Bay Area Leather Alliance Woman of the Year 2010.

During this time, Jody has also been an LGBTQ and women’s rights activist, served on the Boards of both Servicemembers Legal Defense Network and Marriage Equality USA, worked on political campaigns, and worked for equitable treatment of LGBTQ folks.

Although serious about her service and devotion to Liza, Jody thinks it is important not to take ourselves too seriously!