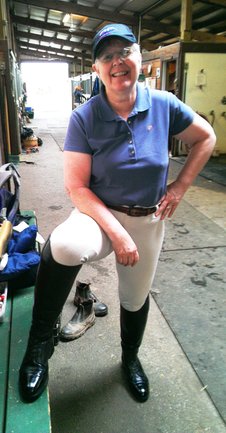 Liza Sibley (International Master 2011) came to power at Woodstock and has been kinky ever since, coming into leather in 2002. Living in Portland with her slave, Jody, Liza is a member of Portland Bad Girls, San Francisco Exiles and MAsT:Portland, having served in leadership positions in all three, as well as having served on the Board of MAsT:International. She is a producer of the Master slave Retreat and emeritus producer of the Ms. San Francisco Leather contest. She presents on hierarchical relationships, several kink topics and pony play. She has judged numerous contests, and has been honored with MAST: International’s 2012 Presenter of the Year Award (co-held with her slave), the San Francisco Bay Area Leather Alliance Woman of the Year 2009, and the Spirit of the Bear 2011 Award from the Bears of San Francisco.

Liza is an avid horsewoman, dog trainer and dolphin whisperer. She has had an interesting life including her very own "Brokeback Mountain" experience as a working cowgirl (inseminating over 1000 cows), earning a Masters degree in Chemistry from UC Berkeley, raising two children and taking a Thoroughbred off the track and training him to be an event, dressage and trail horse.