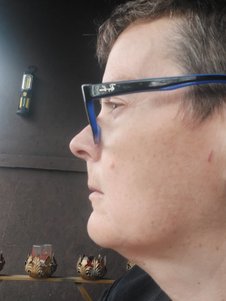 Tracy Black found 2 other Leatherdykes at a gay student convention at American University in DC on a Friday, found "Coming to Power" at Lammas' Women's Bookstore in DC on a Saturday and never looked back.

Back in Philadelphia, Female Trouble, a Women's Leather club formed and Tracy found more of her people and her place. Philly's Bike Stop, her first Leather run with Boston's Viking MC. Eventually finding organized Leather, Tracy's got some stories from runs, classes, house calls, fund raisers, camping and that one Prom.

Tracy first learned basic boot care from girlfriends who'd been in the Army, then practiced on her F.T. Club sisters. Once 21, she learned more from Bike Stop's Tony A. At MAL 1996 Tracy lucked out and got to watch IBB 1995 Tim Cousins shine. She STILL watches and STILL asks questions of all bootblacks she sees.

Tracy kept practicing, first bootblacked in public at Key West on Camac St in Philadelphia, PA in 1996, and became the House Bootblack at the Baltimore Eagle in 1997. She remained so until 2004, and afterward shined there in rotation with others. During her tenure Tracy also became Ms Baltimore Eagle 2001 with her sash Husband Keith P. Tracy also served as the first Mid-Atlantic Bootblack in 1999, Sponsored by the Centaur MC, to whom she will curtsy to her dying day.

Tracy and her Twister mat have been seen blacking in many spaces, events, and parking lots over her shiny years, largely on the East Coast. She is particularly proud of her work with Mid-Atlantic Women's Motorcycle Rally and really misses house calls.