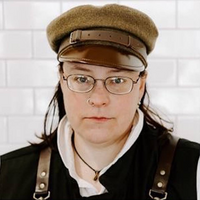 Don’t buy what you can build, and don’t replace what you can repair.  This wasn’t spoken of in my family while I was growing up; it was just something we did.

After putting over 1000 miles in four months across Europe on her first pair of boots, Izzy moved to Milwaukee in 1991.  A few days later, she was hired through a local cobbler to be the shoe shiner at the Milwaukee County Courthouse for the summer.  When the fall semester at UW-Milwaukee started that year, Izzy shifted from days at the chair to evenings at the cobbler shop.  But the cobbler was looking for an apprentice—picking traditional university over training in a then-dying profession, so at the beginning of the spring semester, she packed up her brushes to stick to the books.  Her brushes didn’t stay idle for long.  She always loved to break out her shine kit, carried in a Snoopy lunch box.

Izzy’s first chance to see bootblacking in a leather context was seeing the International Mr. Bootblack contest at IML in 2002.  It was also during IML 2002 that she was able to bootblack herself for a women’s leather party at a Chicago bar.  When she got back home to Milwaukee, she approached a local bar about allowing her to be the bootblack there—the owner mentioned that she would be the first bootblack at a Milwaukee bar in at least a decade.  The Harbor Room was her home three nights a week every week for nearly two years.  In that time, she competed for and won Great Lakes Bootblack 2003 and International Ms. Bootblack 2004.

In 2011, Izzy got the itch to have a regular home for bootblacking, and approached Stag Barbershop, a classic barbershop specializing in precision men’s grooming, and new to her neighborhood.  Response was so positive, Izzy quit her day job in the fall of 2014 to work at Stag full time, and is still active with the Bootblack Community within the Leather community.