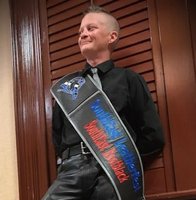 Tidbit began exploring the lifestyle in 1997. He started out as a kinkster and play slut, but has since found his home in Leather, with a firm respect for the morals, ethics, and  integrity, and camaraderie that this path has brought to his life.

Formerly active in Gnosis and a former board member of TALON, tidbit pledged the

Tarheel Leather Club in 2011. He has previously held the offices of President and Vice-President, and Scribe, and currently serves the club as the Road Captain and an in-house bootblack. He is also active in MAsT Winston-Salem, a leader of the Twin City Kinksters, and Regional Representative for the Southeast region of MAsT-International.

Tidbit was also honored to serve the state as the 2012 NC Bootblack, and is having a blast currently as the Southeast Bootblack 2018. While constantly on the prowl for more to learn, he also strives to make himself available to teach anyone that's wanting to learn.