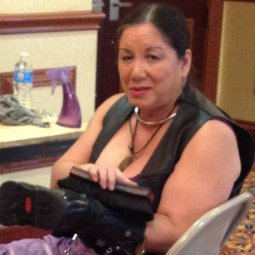 Girl Amelia has been a practicing attorney for 30 years and has presented classes at the 2010 -2012 and 2014-2018 MsC (Wills and Advanced Medical Directives); Femme Boot Pride Weekend 2010 (Being a bootblack and the M/s dynamic); Winter Solstice 2010 (Bootblacking 101); Femme Con 2012 (Bootblacking 101); Philadelphia Leather Leadership Conference 2014 and 2015 (Why Bootblacks are Needed at Leather Events and How to Care for Them; Accessibility at Events). She has also taught at Black Rose and various MAsT meetings in Virginia, New Jersey, and Pennsylvania.  Girl Amelia is the author of articles for Baltimore OutLoud magazine on topics involving immigration law.