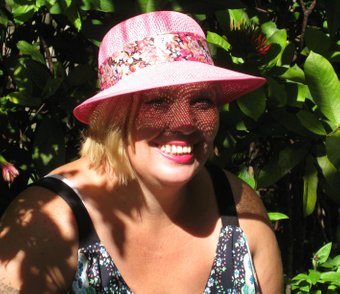 Angel Propps stumbled into kink, literally, when she punched a man on a NYC subway and found herself with a job in a Pro Domme’s dungeon as a result. Of course being 16 she also found herself fired a short time later. It took many years for her to understand what ‘kinky’ really meant. Her first real introduction to the community came after a very strange thing happened at a bookstore in NYC and she found herself jetting off to Vancouver in 2010.

After that she found her way to FET and then met her hus-wife OB Hamm (she says met, he says stalked—whatever), who introduced her to Leather and the broader community.

Angel served as Ms. SouthEastLeatherFest 2011, was named First-Runner up at International Ms. Leather 2012, and won the title of Women’s International Leather Legacy 2012. She served as vending manager for SELF, was nominated for two Pantheon of Leather Awards, and was nominated for a John Preston Award. In addition Angel was a Finalist for the Golden Crown Literary Society Award in the Paranormal/ Horror category, won an Honorable Mention from the Saints & Sinners Literary Fest’s Short Story Contest and won, under the pen name Angela Hamm, The Pauline Reage Novel Award. One of her short stories was adapted into an AVN nominated screenplay. Several of her works have appeared in Lambda and Samois Award winning anthologies. She was a writer for Leatherati, and also wrote articles for several sex sites as well.

She lives in Florida, home of the newly wed and nearly dead, and has retired from public life and writing to focus on her best health and her home life.