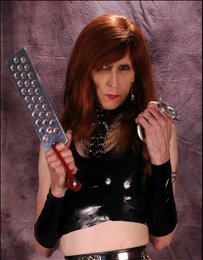 Pantheon of Leather 2009 Woman of the Year

Mistress Cyan is always looking to "give back" to the community that she loves in any way she can, and she is especially active in charity work.  Mistress Cyan has held her Annual Thanksgiving and Christmas Slave Auctions for nineteen years.  In 2005, she raised more than $5000 in food & supplies for the needy and more than $1700 for the victims of Hurricane Katrina. In 2006, more than 32,000 people were fed as a result of her efforts, in 2007, as part of The Los Angeles Leather Coalition's Fundraising Committee, she helped wipe out a debt of more than $14,000 and put the coalition in the black.  Mistress Cyan proudly continues that tradition of fundraising to this day.

"I LOVE what I do, and I NEVER dread going to 'work', because My work is My dream. What more could I ask for than to live every minute of My life doing what I like?"