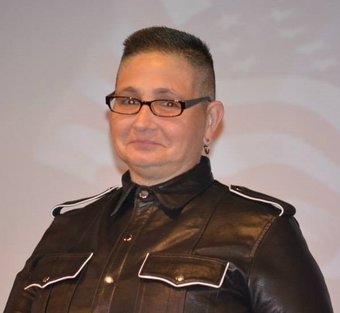 OB Hamm has been in the kink/Leather lifestyle for over 20 years. His name didn’t come, contrary to popular belief, from a fetish-love for a certain feminine hygiene product but is the result of an AOL chatroom autocorrecting his then-chosen name.

He was a member of Tarheels Leather Club for several years, as well as a full member of SSCN and a member of CAPEX. He also hosted numerous play parties for Hickory Playground.

He’s served the community as MR. SELF 2012 and American LeatherWoman 2013. In addition to being a titleholder OB spent many years traveling the country teaching classes both in classrooms and in his vending booth. While retired from vending he’s always up for talking about and playing with whips.

For his vending he received a Pantheon of Leather Award for Business-person of the Year in 2012. In addition he has sponsored many events and contests, has served as a judge at several contests, and is a proud Leather Daddy.

Currently he lives in Florida on the Forgotten Coast with his wife, Angel Propps.