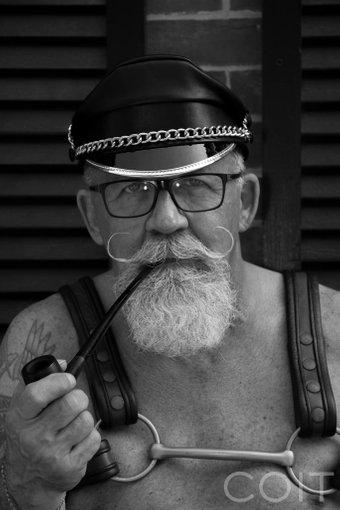 SIR Tom Matt harkens back to the days before flagging, before cell phones, before the internet, before “Facelessbook” and before “dating” apps” when as he says “there were The Leathermen, the Drag Queens and everybody else.” He comes from a time when cruising was a  skill, communications was an art, the sex was wild, raunchy and uninhibited and dildos were carved out of stone. Sir Tom has been out 48 years and an integral part of the leather community 41 years. He has considered himself a resident radical since being beaten by the police during the Stonewall Inn riots in 1969. He is also known for actively lobbying the APA to remove homosexuality from the DSM and was present in Hawaii for the record vote in 1973 that removed homosexuality from being classified as a mental disorder. His advocacy continued thru the AIDS epidemic and the historic March on Washington and countless other movements.

Today, he refuses to slow down. Sir Tom has won the title of Mr. CT Leather in 2016, placed First-Runner-Up at MAL 2016, he competed in IML 38 and won the Atlantic States Leather Sir title in 2017. In addition he has appeared in two fundraising calendars. Sir Tom champions two HIV stigma projects and is an ardent supporter of women, puppies, bi’s, trans and POC in our community and is well known for his philanthropy. Despite several horrific acts of hate and discrimination he has personally experienced, Sir Tom is not about to give up the struggle we still face in obtaining equal rights. He says “Equal rights are for for EVERYONE regardless of what segment of society you belong to; gay, bi, trans, lesbian, straight or questioning. Regardless of race, of color, of religious or nonreligious beliefs or what kink your into or not.  Equal rights Regardless. Its that simple.”

A five time member of the Mile High Club, Sir Tom has travelled the world and spread is DNA in 27 countries sometimes in the whackiest of places like in the organ chamber of London’s St Paul’s Church during a concert or another in a Romanian jail during the Ceausescu regime. “Luckily, I’ve been clean and sober now 15 years and actually remember, well, most of it.”   Professionally Sir Tom has been everything from a porn actor in the 1970’s (yes before they had sound and when movies were produced in grainy 8mm) to a Behavioral Research Scientist for the CDC. While now retired from his full time job and his positions on the board of two charitable foundations, Sir Tom spends his time empowering LGBT youth, teaching Leather 101, performing pro bono pre surgical assessments in the Transgendered community and traveling to leather events with his boy Trell Walters who also happens to be Atlantic States Leather boy 2017.